David Corker’s comments re Tom Hayes published in Bloomberg, the Washington Post, City AM, the FT and Sky News

David Corker’s comments re Tom Hayes published in Bloomberg, the Washington Post, City AM, the FT and Sky News

​“One of the most difficult decisions a defence lawyer has to make in a fraud case is whether or not to put the client on the stand, particularly in those instances when clients are articulate and eager to speak to the court. In this case, Hayes’ pivotal decision to testify has proven disastrous, as he was skilfully and thoroughly cross-examined by Mukul Chawla QC regarding the 82 hours of interviews Hayes had with the SFO during the investigation. The defences’ contention that Hayes would have said anything in order to have the charges brought against him in the UK rather than the US lost their force once Hayes was asked to explain each admission. In this case, it would have been better for Hayes to have remained silent.”

David’s comments have been published in Bloomberg, the Washington Post, City AM and the Financial Times.

“In financial crime, as opposed to burglary, rape or murder, 14 years is a top-end sentence. 14 years is normally reserved for the leaders of organised crime gangs who defraud the tax payer of millions of pounds of stolen VAT. The fact that he got 14 years today is a signal that the scenery for white collar criminals has darkened considerably.” 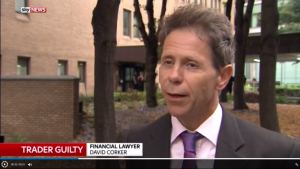